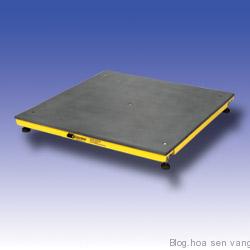 Scaletron Industries, Ltd. (USA) – The water treatment process at an Illinois-based water treatment plant requires adding a specific volume of lime (calcium hydroxide) to a slurry mixing machine. Lime, in slurry form, is typically used for water softening. The lime slurry removes hardness (calcium and magnesium ions) by precipitating them out of the solution. The process is also effective at removing a variety of microorganisms and dissolved organic matter.

Plant technicians add a specific volume of lime daily to make the slurry. Determination of the exact volume is made by precise weighing of the slurry mixer before and after adding the lime.

The constant vibration of the mixer would cause the slurry mixer to “walk” across the scale platform. Not only would this cause erratic, unreliable scale readings, but operators would have to deal with the inconvenience of repositioning the mixer each time a weight measurement was needed. Additionally a safety hazard would exist because there was the possibility the slurry mixer could be vibrated to the edge of the scale platform and fall off.

The slurry mixer on the scale was situated above a metal grating which meant that the combined weight of the scale and mixer when processing lime had to meet the grating manufacturer’s load tolerance specifications.

After reviewing the project with water treatment technicians, Scaletron engineers proposed a straightforward solution to the problem. Using the Scaletron Model 4040™ Digital Platform Scale as a base level design, Scaletron customized the Model 4040 scale to meet specific application requirements.

A template of the bolt pattern in the bottom of the slurry mixer was used to tap mounting holes in the scale platform. This permitted the mixer to be bolted to the scale platform preventing it from moving about due to vibration. Special, larger diameter scale feet were also designed and installed to enhance uniform distribution of the combined mixer/scale weight on the metal grating.

The modified Scaletron 4040 scale is designed for accepting permanent mounting of a tank or drum for pump in/out applications. Standard gross capacity is up to 5000 lbs. (2268 kg) and Scaletron can custom engineer heavier capacity limits. The scale weighs to an accuracy of 0.5% of full scale capacity.

Protection against lime and other caustic substances is assured by rugged steel construction with a special corrosion resistant finish. The platform has solid 1/2″ PVC decking. Scale electronics are protected in a NEMA 4X, UL approved enclosure.

The custom bolt pattern on the scale platform enabled technicians to secure the slurry mixer and prevent it from walking during operation of the mixer. This enhanced accurate scale readings. The slurry mixer is now stable and prevented from falling off the edge of the scale thus eliminating the previous safety concern.

The broad scale feet more evenly distributed the combined weight of the slurry mixer and the scale. This assured a better balanced payload so that load ratings for the metal grating were not exceeded.

The enhanced stability and static positioning of the mixer also had a beneficial effect on the overall water softening process. When preparing lime slurries for controlling pH, lime solids must stay in suspension if they are to serve their purpose in downstream processes. A stable, balanced slurry mixer agitates the slurry more efficiently and more effectively to successfully suspend solids. 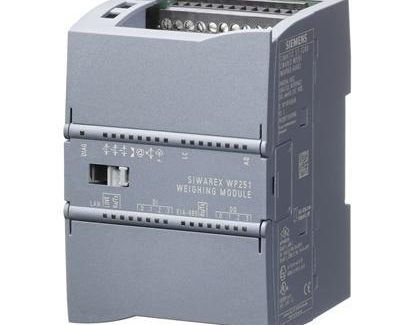