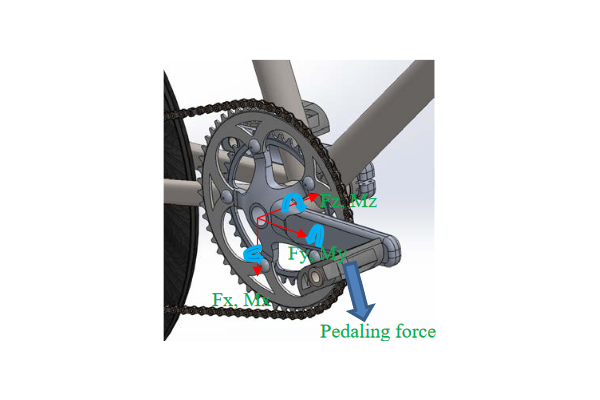 Micro-Measurements (Singapore) – Development of Power Meter for a Bicycle.

Micro-Measurements® strain gauges were used in the development of a bicycle power meter at Nanyang Technological University, Singapore. The strain gauges were used to measure the actual torque applied by the cyclist who is responsible for the power output. The strain gauge was mounted on a separate sensor member that can be easily retrofitted in-between exiting bicycle cranksets. The main challenge was to provide an accurate measurement of torque by eliminating the non-contributing forces and moments on the system. The research is aimed at developing a cost-effective solution for an accurate power-measuring device for a cyclist.

Power meters are becoming increasingly popular among professional cyclists as an essential tool to evaluate performance. Power meters enable professional athletes to track their training progress. This feedback data provides the athlete with options to vary levels of intensity and enhance performance. It provides instantaneous feedback to users about their level of performance, as the output can be read from a small monitor mounted on the handlebar. There are different types of power meters available on the market and these are categorized based on the position of the sensor to be mounted on a bicycle. The most common type is the chainring-based power meter. The major challenges in manufacturing a good power meter are (a) Accuracy, (b) Outdoor temperature variations, and (c) Cost. A good power meter should only consider the torque (about spindle axis: z-axis) which is responsible for actual power output. In a real scenario, the forces applied by the cyclist on the pedal not only contribute to the torque output (z-axis) but are also responsible for the forces and moments in other directions (x and y-axes), as shown in Figure 1. The components of forces and moments in x-axis and y-axis contribute to bending of the spider crank rather than the power output. It is a challenge to eliminate the effects of these unwanted forces and moments to provide accurate and reliable torque measurements. Standard shear strain gauges in a Wheatstone bridge are helpful for eliminating the bending loads, however, they may not be sufficient to cancel all the unnecessary forces and bending moments in the different directions. Therefore, special care should be taken while arranging the strain gauge sensors in the measuring device. Furthermore, the temperature variation in the real-life cycling is another challenge. The strain gauges are highly sensitive to the thermal input due to the temperature variations. And the last challenge is the cost of power meters. Most power meters come as a complete set with built-in power-measuring sensors. For example, most of the chainring-based power meters set include the crank arm and the chainrings along with the sensor elements. As a result, the overall cost is very high. Thus, it was required to develop a power meter that would have a very good accuracy, less sensitivity to temperature and relatively low cost.

To accurately know the power output, the first step is to precisely measure the torque applied by the cyclist who is responsible for the power generation. The actual torque applied by the cyclist can only be asserted when the measurement device is able to eliminate all the unproductive forces and moments in the system, for example, the bending of the crank chain towards the frame when the cyclist is pedalling. A sensor member was designed and placed in between the chainring and the crank arm, interconnecting these two parts. A full bridge pattern (N2K-XX-S5046-50C/DG/E3) was selected and mounted on the sensor member. The strain gauge in the sensor member was connected in such a way that the novel arrangement only outputs the the pedalling axis’ torque. Thus, the special arrangement and circuit diagram enabled accurate measurement of the torque that is responsible for the actual power output. Furthermore, the sensor element has ten fingers. Five fingers were connected to the chainring and the remaining five fingers were connected to the crank arm. In this way, the sensor member takes account of both the action and reaction loads in the system. The measurements are taken from both sides and averaged, thus increasing the accuracy and repeatability. In addition, the full-bridge strain gauge pattern was used to compensate for the temperature variation effect. Most importantly, the sensor member was the standalone component and could be retrofitted into the existing bicycle crank sets, reducingthe cost of a power meter. The strain gauges are very sensitive sensors and the positioning is crucial in order to accurately measure the torque. The strain gauge dimension was very small and tight tolerance was required for accurate positioning of the sensor member. Furthermore, it was a difficult task to solder the small junctions. Great care was needed at the solder junctions as improper solder may also induce the thermal effects. The Micro-Measurements® experts helped us to perform a precise positioning and soldering of the strain gauges and the junctions as shown in Figure 2. The difficult part of wiring, i.e., wiring from strain gauge junction to a separate connection terminal, was performed by the Micro-Measurements team. The circuit was later completed at Nanyang Technological University. The results are also presented in Figure 2.

Professional cyclists are always keen to improve their performance. The best way to improve performance is to keep a record of every training and analysing them. A common method is to monitor the power output from the cyclist. The bicycle power meter serves best for this purpose. Power meters enable professional athletes to track training progress because they provide an accurate and realistic measurement of the cyclist’s real-time power output during cycling. A professional cyclist can analyse the data from the power meter to develop better training strategies to improve the performance. There are a variety of products available on the market, however, these products are either costly or hard to install. The accuracy and the cost are the major areas where there is still room for improvement. To improve the performance of the cyclist, the accurate measurement of the torque is very crucial. When a cyclist applies force to the pedal, a torque is generated at the bottom bracket axis (z-axis). Only this torque is responsible for the power generation. However, in an actual scenario, a portion of the force applied by the cyclist also contributes to the forces and moment at the mutually perpendicular axes (diametral axes: x-axis and y-axis). These forces or moments are responsible for the bending of the cranksetand do not contribute to actual power generation. Thus, it is very important to eliminate these non-contributing loads in order to provide an accurate power reading. The power meter should not be sensitive to the moment except for the moment at the crank rotational axis (z-axis). A novel arrangement of the strain gauges has been developed and used. This novel arrangement automatically cancels out all the non-contributing forces and moments. Thus, the measurement purely represents the actual torque responsible for the cycling power output. A very precise full bridge strain gauge pattern has been used as the sensors. The use of a full bridge pattern has the ability to cancel the temperature effect. Thus, not only the non-contribution forces and moments are eliminated but the thermal effects have also been minimized. The major advantage of this power meter is that the sensor member is a standalone component and can easily be retrofitted in-between the chainrings and the crankshaft. This sensor member can be retrofitted into different existing cranksets, thus the design is more flexible. The product is similar to the after-market bicycle accessories that are added to the bicycle with minimal or no modifications. The cyclist does not have to purchase a whole crankset with a built-in sensor member, so the cost is reduced remarkably. A laboratory test-rig bicycle with the Micro-Measurements® strain gauge in the sensor element is shown in Figure 3. The sensor member will be covered to protect from the outside environment such as rain, moisture, wind etc.

“Using precise strain gauge sensors, we have developed an accurate but cost-effective power meter which can easily be retrofitted to a bicycle’s existing crankset”.

We would like to thank Ming Yin, Zhongyuan Xu and Yue Xu and other experts from Micro-Measurements® for their kind support in this project. We would also like to thank Liew Keat Ken and Syed Faruq Al Aidid Bin S Afandi for their contributions in experimental work.

Forces and Moments while pedaling.

Sensor member preparation and results: a, b: Strain gauge positioning and wiring; c: Averaged voltage reading for loading and unloading the test weights before calibration; d: Average torque output from the computer after calibration.

📰 There you go the latest news at Blog.hoasenvang.com.vn, weighing news on equipment accuracy definition and weighing control devices, Development of Bicycle Power Meter using Strain Gauges all free news and non-profit, Yes.. All purpose serving you is my pleasure.

[🔥 High quality Ads] Can cong nghiep the gioi chinh xac GLS at công ty phân phối Cân sàn điện tử Hoa sen vàng – Golden Lotus Measuring Equipment, weighing scales news, electronic scale news, load cell news, retail scale news, industrial scale news, … International Electronic Weighing for Feature Thanks to Weighing_review internet site for World across-the-board Weighing Scales News. All noesis on the Blog is meted out and is not accountable for the noesis meted out for any advertising cross-purpose or exactitude data. Please do not mark off, all changes are unsuccessful to the arms manufacturer without prior find. 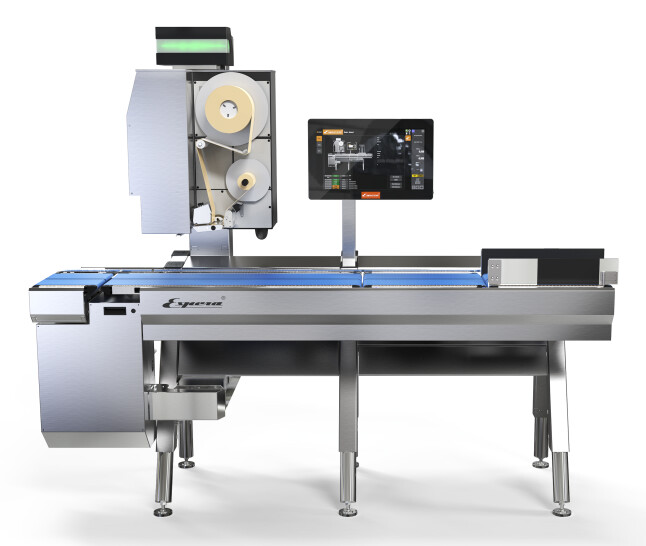 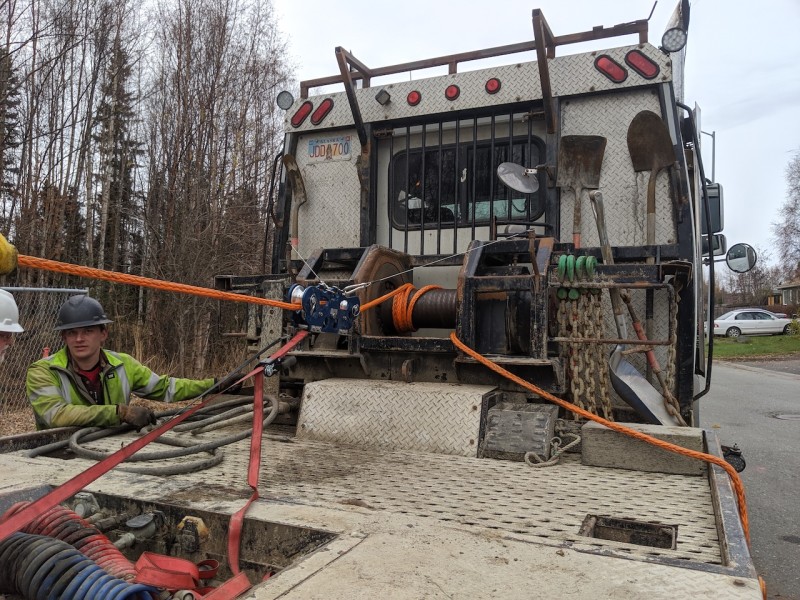